You couldn’t have picked a better day for running in my opinion. A chilly 39 degrees at the start, mid-40’s and partly sunny for the race. One of the perks of an elite bib number is the heated tent near the start, so I felt pretty comfortable in my Willow St. Athletic Club racing attire.

The race went off exactly at 8:30 am. The first mile of this classic 15k race is downhill, which leads to fast splits. My legs felt dead but my breathing was fine, so I just tried to relax and not think about it as we rolled past the mile in 5:45. I had my watch on but hadn’t planned to look at any splits until after the race. There were volunteers reading splits at intervals along the course as well as clocks at the mile markers. The timing team did a fantastic job with this. I glanced over at the Mohawk River as we ran along the path and then we turned onto the streets again, past the new (somewhat controversial) casino still under construction.

Mile 2 was more controlled (6:05), partly because two miles marks the beginning of the first climb as we run up towards Union college. Miles 3 and 4 include several steady climbs so those splits were the slowest of the race (6:22 and 6:24). Up to this point I had been running with my Willow St. teammate Karen, but we separated after 4 miles. I was in no-woman’s land for awhile, half-heartedly trying to catch up to the woman in 3rd ahead of me, although I had a lot of ground to make up. The terrain is mostly flat from miles 4 to 6 so I was able to quicken my stride and focus on a few guys ahead to chase down for the next two miles. Miles 5 and 6 were 6:02 and 5:56 respectively. 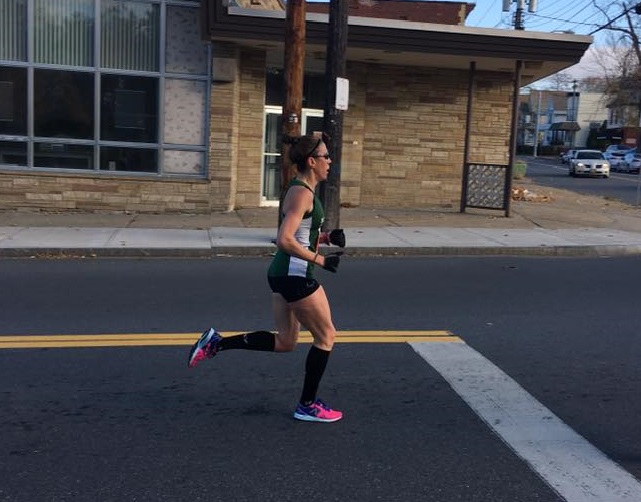 I came though the 10k in 38:15 and then we entered Central Park. Volunteers helped to direct us through the park and around several turns. I had run a preview of the course the previous weekend so I knew the last big hill was ahead. My sister Stephanie had volunteered to be a course marshall and she was posted at the top of that hill, around mile 7.5, which was a nice boost. The hill wasn’t especially steep or long, but with only 3k to go we were all running on tired legs. Splits for those miles, mile 7 (6:10) and mile 8 (6:16). 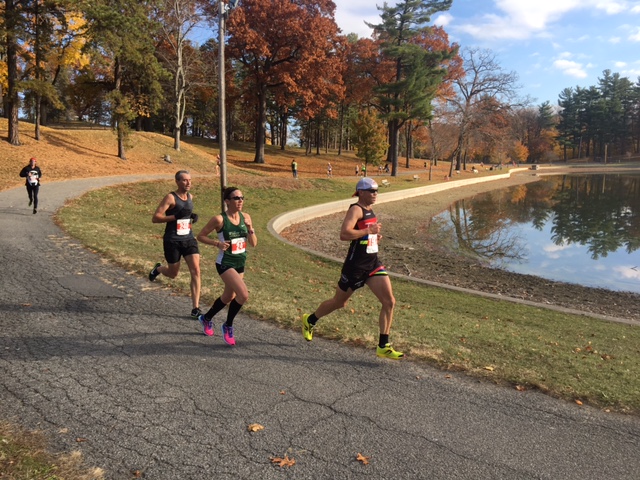 Love those new racing flats (I picked them up at Fleet Feet the day before the race). Thanks for the photo Brandon Viloria!

The last 3k is either flat or downhill. After exiting Central Park we turned into Vale Cemetery and then onto a beautiful path in Vale Park, my favorite part of the course. Lots of cheers from spectators in this section. Before I knew it we hit the 9 mile marker (5:55), and as I glanced at the clock I knew I would be close my all time 15k PR, set in 2003 fresh out of college. With that goal in mind I passed the woman ahead of me and used the downhill finish to close the last 0.3 miles in 1:38 and cross the finish line with a new PB of 56:51.

Coming off the Hannaford Half I felt a little defeated and ended up taking a full week off from running. My hip was bothering me, and I need to take some time to rest and rehab. I was worried I’d be setting myself back, but it ended up being a good decision. I felt so much better for this race, and my overall pace was a huge improvement.

One last thing, I wanted to mention… I totally missed my alarm the morning of this race. I had it set for 5:30 am and when it went off I just turned off my phone and went right back to sleep. I didn’t wake up until 6:30 and we were supposed to leave at 6:45! Somehow we managed to get all four of us dressed and out the door by 7, and get to the start by 7:45 so I could warm up with my teammates. But, holy crap that was close. I guess it ended up being a good thing because I didn’t even have time to be nervous.

Awkward ending here… ever *almost* miss a race start? I’ve come close a few times, and missed the start of Troy Turkey Trot like 10 years ago!